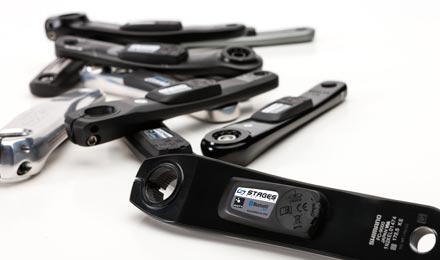 Power. Love it or hate it, it has revolutionized the way cyclists can train and race. Whilst some still prefer to train by feel (not that there is anything wrong with that), others like the ability to train with science and numbers, using the same tools and methods as the pros do.

Until very recently, training with power has been an expensive proposition. American company Stages has changed all that with their simple yet effective power meter design. By using just the non-drive side crank, Stages have created a light, easy to fit, easy to use power meter that doesn’t cost the earth.

Stages take genuine Shimano and SRAM crank arms and retrofit strain gauges (the technology used to measure power in the majority of power meters), an accelerometer (to measure cadence), an ANT+ chip (a wireless protocol owned by Garmin) and CR2032 battery unit all in a small unit on the inside of the crank arm. All this technology adds 20g to the weight of the crank arm (about the weight of a chocolate bar).

The Stages power meters are compatible with a wide range of ANT+ devices such as Garmin Edge bike computers (other bike computers are available) and uses Bluetooth to communicate with an iPhone to run firmware updates.

Cycle Art is pleased to confirm we are now a Stages dealer. In addition to stocking a selection of Stages cranks, we also have a 105 demonstrator crank that can be hired for B#40 for 2 weeks. We would then deduct B#40 off the price of a power meter should you choose to buy one from us. Stages power meters start at B#599 for the 105 and SRAM Rival GXP versions.

When buying a power meter, if you have a Garmin Edge computer, one of our members of staff will happily set up your Stages power meter and show you how to use it, calibrate it, and make the most of it.