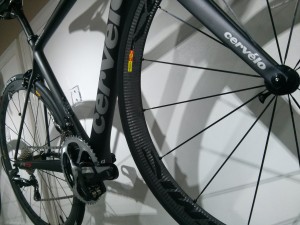 When it comes to lightweight, super stiff race bikes, Cervelo are up there with the best. Cervelo bikes have become such a permanent installation in the pro peleton that it’s sometimes easy to forget that the company has only been around since 1995. Founders Gerard Vroomen and Phil White have taken Cervelo from a small, privately owned bicycle company into one of the most famous and revered bike brands in the world and is regarded by many as being the Apple Computer of the bike world.

The Canadian company may not have the heritage and tradition of some of the bike brands in the peleton, but what they lack in history they more than make up for with their extensive use of groundbreaking and innovative technologies, all of which come with fancy marketing names and acronyms.

On the top of Cervelo road bike pile is their much vaunted Project California or RcA, a no expenses spared experiment into bicycle frame design, pushing the boundaries of what is possible. The current RcA is a limited edition, hand made 667g frame, built in California and finished in Canada. If you need to ask how much it costs, you probably can’t afford it.

Cervelo are another company who adopt the trickle down effect, in fact they openly admit that the RcA exists to learn lessons from for their mass production bikes. The R5 is just that – a more affordable production version of the RCA. At B#5199 for a Dura Ace equipped R5, or B#5299 for a SRAM Red version, the R5 is far from cheap. However, the fact is most of the Garmin Sharp team used the R5 during the 2013 race season, so if it’s good enough for them, it’s good enough for us.

After the success of the R3 Dark (essentially last year’s R5 painted as an R3), side by side in the shop you can see how the new R5 demonstrates a move on from the previous model. With more aerodynamic Squoval 3 tubing, internal cable routing, and clearance for 25mm tyres, the R5 uses Cervelo’s methodology of evolution rather than revolution.

The R5 we had in the shop (it lasted about half an hour on the shop floor before a customer put a set of Mavic Cosmic C40 wheels on and bought it) attracted the most attention we have ever seen.

The full gallery of the R5 can be seen at http://www.pinterest.com/cyclea/cervelo-r5/