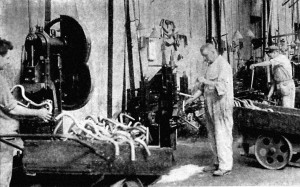 French wheel and clothing company Mavic are celebrating their 125th anniversary by launching a range of limited edition “125 Ans” products – and Cycle Art has them in store now!

From it’s humble beginnings in 1889, Mavic has become the world leader in factory built bicycle wheels and a market leader in cycling clothing, shoes and helmets. It’s yellow logo is synonymous with the Tour de France through the famous neutral support vehicle. Mavic was born from the merger of two small companies with the same President – one manufacturing spare parts for bicycles and the other a nickel plating company.

The French company has always been at forefront of technology, and as early as 1934 Mavic began testing a metal rim when the competition were using wood. The subsequent “secret wheel” was used to win the 1934 Tour de France under Antonin Magne. 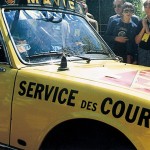 In 1973, the now famous Mavic neutral service car first made an appearance. As yellow as the Malliot Jaune itself, it has become a permanent installation within the Tour de France and Paris Roubaix caravan.

125 years on, Mavic offer a comprehensive range of wheels, tyres, helmets, shoes and clothes, and in terms of factory built wheels we believe they are some of the best on the market.

To celebrate their 125 years, Mavic have released a special edition range of wheels, tyres and clothing. 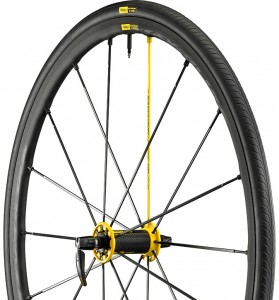 Ksyrium 125
The Ksyrium 125 wheels, which are a development of the previous Ksyrium SLR wheels, pack in all of Mavic’s know-how into one of the finest lightweight clinchers money can buy.

Previous Ksyriums have used what Mavic call ISM (inter spoke milling), where excess material is machined away leaving the rim strong where it needs to be but lightweight. The 125 takes this process a step further using “ISM 4D”, with each rim measured before milling to ensure the precise amount of material is removed. It also features a more rounded profile than before, saving more weight but also provide a more aerodynamic rim shape.

As with other Ksyriums, Mavic use a process called FORE, where instead of drilling through the rim bed to house the spoke, the inner surface of the rim is pressed into the rim cavity, meaning the spoke does not go all the way through the rim. According to Mavic, this both increases the strength of the rim and makes the wheel more rigid.

The rims are also treated to the Exalith 2 coating process, which not only looks good but increases the life of the rim and improves braking.

As a finishing touch, the 125 Ans Ksyriums have Mavic yellow hub flanges and a single yellow spoke in each wheel, making a truly unique wheelset. The wheelset weight is a very low 1370 without tyres (1920 with tyres).

Only 6000 pairs will be made, and only a fraction of those will come to the UK. We have some in the shop. 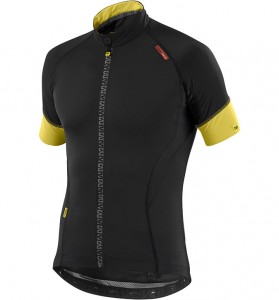 125 Ans HC Clothing
Mavic’s HC clothing range has proven to be extremely popular, and as part of their 125 anniversary the company has released a special yellow version of the HC jersey and bib shorts with “125 Ans” labels on the arms and legs. The clothing is in very limited supply, and Mavic has sold out already – but we have a full size run of both the jerseys and bib shorts in stock.