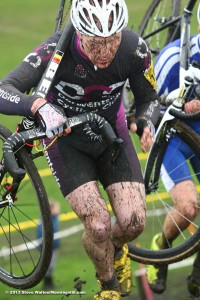 One of the great things about cycling is the diversity of disciplines there are. From BMX to downhill mountain biking, from road racing to hill climbing, from XC racing to time trials, there is literally something for everyone to pin a number on for.

One of the most popular forms of the sport is ‘cross. Whilst it’s certainly not for everyone (as it involves running), one man who lives and breathes ‘cross is Cycle Art owner Tony Glover. When he’s not in the workshop building lovely hand-built wheels or helping customers build their dream ‘cross bike, he’ll be found fueling himself up on Pam’s cakes whilst watching re-runs of World Cup cross races in the Cycle Art cafe, in preparation for an evening of training.

Tony has always been extremely competitive on the local scene (and regularly places top 20 in National races too) but the last time he won the CXNE series was 1995. However, in his first season as a vet, after a season-long battle with Kenny Johnson and James Anderson, Tony confirmed himself as the 2014 CXNE vet champion with a win this Sunday in the final round in Whitby.

Despite being ill midway through the season which led to 2 DNFs, Tony won 5 races out of the 9 he finished, and with it all coming down to the wire on Sunday, Tony snatched victory from the jaws of defeat enduring some awful conditions (and some suspect gear changes on the second lap).

Tony has raced season long on a pair of custom Ridley X-Nights, which will no doubt be receiving a thorough strip down and clean (and a re-index) before Tony puts his feet up for another year.

A special mention must be given to Tony’s long suffering wife, Pam – as without her cake, Tony might not have won the series. Tony’s secret nutrition of choice is of course available to all racers, in Cycle Art’s cafe.

Whilst everyone at Bicycle Repairman/Giant Newcastle and Cycle Art would like to congratulate Tony on his series win, Chris and James would ask him kindly if no more ‘cross videos be shown in the cafe until next season. 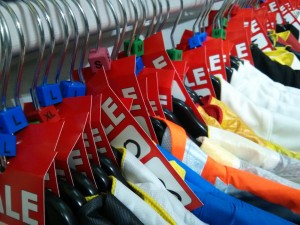 We’re sure Santa brought you all the cycling gear you can ever need. However, if you found your stocking to be slightly lacking, or the January weather is leaving you with a lack of motivation for riding outside, Cycle Art have the answer with a massive clothing sale.

We aren’t just selling off unwanted stock – we are discounting some current season Castelli and Mavic clothing, including selected winter clothing.

With up to 50% off, and at least 20% off all sale items, it’s a chance to kit yourself out for the rest of the winter or grab a Sprinng/Summer bargain for all those Spring Mallorca training camps!