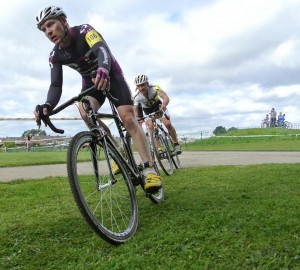 Tony Glover
Tony has been riding for 28 years, and for 21 of those years he has been racing. He is a local legend on the ‘cross scene having notched up over 50 ‘cross podiums, over 20 mountain bike wins, and has won the senior CXNE league. He has even competed in the 3 Peaks – the toughest ‘cross race in the world (it is essentially a fell race with a bike). He is also quite handy on the road having covered 417 miles in the National 24 hour TT, been a road race winner, and a regular top 5 finisher in TTs in the past. He has worked in the bike industry for nearly 20 years after earning a degree in mechanical engineering. Along with Mark, he has built up Bicycle Repair Man from a tiny shop in Prudhoe into the biggest bike shop in the North East by some considerable margin. When it comes to ‘cross bikes and ‘cross racing, there isn’t much he doesn’t know. Tony is also regarded as the North East’s best wheel builder. He currently races on 2 superlight custom Ridley X-Nights and trains on the road on a Ridley Helium SL. He also competes from time to time on his Giant XTC Advanced 29er mountain bike.
Club: Derwentside CC
Dream bike: Thomas Frischknecht’s Ritchey Swiss Cross
Interesting fact: While Tony was at university, he designed and built the first ever “V” brake 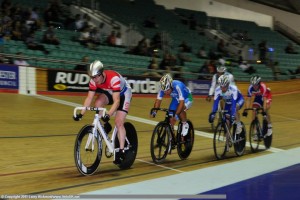 Chris Bush
Hanging up in behind the Cycle Art counter is a British National Champion jersey. This isn’t a gift or a charity auction special – this belongs to our very own track champion, Chris. Chris has been riding for over 30 years with 25 years bike industry experience and has an impressive palmares. He has 2 gold medals in the Great Britain masters points race, a silver medal in the European Masters points race, a bronze medal in the British Open Team Pursuit championship and has shared the podium with Sir Bradley Wiggins when he was part of a team that won bronze in the 1998 National Madison Championship. He is also a Level 2 British Cycling road and time trial coach, rides into work every day regardless of the weather, and is Cycle Art’s bike fit expert having carried out hundreds of successful bike fits. Chris races on the track on a Ridley Arena, time trials on a Cervelo P2, trains and commutes on a Sabbath September and a Giant Bowery fixed 64” gear, and for fun has a Giant XTC mountain bike and a tandem called George. He also trains and occasionally races on a stunning Sabbath Mondays Child.
Club: VC St Raphael
Dream bike: 80s Cineli Laser track bike
Interesting fact: Chris used to be a Samaritan volunteer 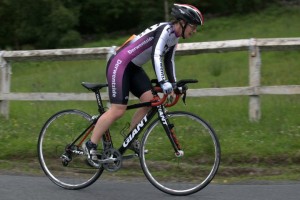 Pam Glover
An important part of the Cycle Art ethos is the café, and without Pam, there would be no café. Pam is qualified in hotel management, and has worked as a catering assistant in a country hotel, ran a restaurant in Rothbury for 7 years, has been a catering manager for 2 schools and a day nursery before becoming the café manager at Cycle Art. Away from baking the best cakes in the North East, Pam is also a passionate cyclist, racing in time trials and ‘cross, as well as club runs and offers a unique perspective from the female point of view of cycling, which is almost unique in the North East bike shops. Pam races on a Giant TCR Advanced and races cross on a Ridley X-Fire (when it arrives).
Club: Derwentside CC
Dream bike: “Something that will make me win”
Interesting fact: Pam originally wanted to an air hostess